What to Know Before You go Camping with Cannabis

Bringing cannabis camping can be a marvelous thing. Just remember the bears and rangers.

A little cannabis can enhance fireside connection to your friends, your partner, and especially nature. As you commune with nature, though, it’s important to pay attention so you don’t accidentally bring harm to yourself or the environment. Essentially, safely camping with cannabis boils down to being aware of three things: personal safety, environmental safety, and stash safety.

Personal safety is the consumer not hurting themselves, others, or falling afoul of the law. Environmental safety includes not harming nature (think safe butt/roach disposal). Finally, stash safety means you don’t lose your weed to critters – or worse, park rangers.

Personal safety when camping usually means knowing about where you’re going. It also means letting others know where you’ll be, and taking the right precautions when you’re there. Thankfully, parks across North America are staffed with many rangers and wardens who can help you, should one of these go wrong. But, occasionally, cannabis consumption can make each of these things more difficult.

Ask many consumers, and they’ll tell you the story of how they’ve eaten a bowl of cereal covered in OJ, but didn’t realize until it was done. This sort of mistake is a funny story at home, but being high can be a serious issue in the backwoods. This is true even in a campground, where improper fire safety or food storage can lead to personal injury – or worse.

As a result, it’s best to consume cannabis when your camp is cleaned up and you don’t have pressing camp chores to attend to. A camp task like chopping wood can be seriously dangerous when you’re less than fully attentive, so you might want to finish the night’s wood prep before you pass a joint around the campfire. While it’s lower stakes, the same goes for setting up a tent – often a confusing enough task sober, do it stoned and you’ll probably end up with rain leaking in later on.

There are plenty of places where proper personal safety and environmental safety overlap. Fire is one of them. Cigarette butts are incredibly common causes of forest fires. While cannabis doesn’t burn the same – it still burns. Accordingly, improper roach disposal can have seriously detrimental effects on the environment if it leads to a fire. Good thing almost every campground has specifically designed places to put ash and have fires, right?

Use your campsite’s fire ring for all ash disposal, and only smoke if there’s no fire ban in effect. The same logic goes for hot-boxing your tent. While all modern tents are treated with fire retardant, there’s no such thing as a truly fireproof tent or sleeping bag. 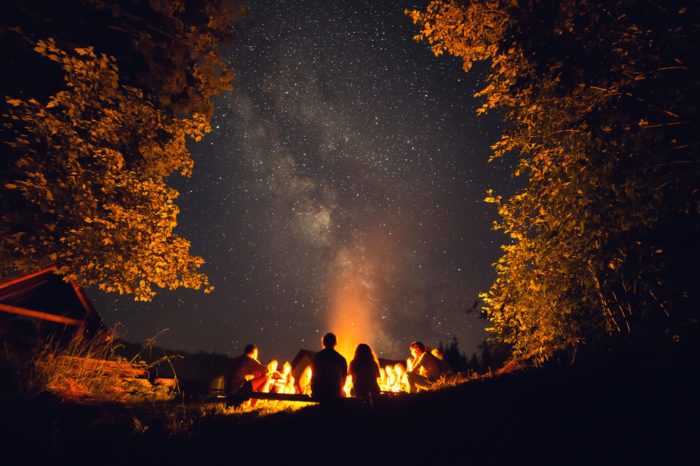 Now, about that stash. Cannabis is a pungent plant and animals will be interested in it. It is not uncommon for a joint left out at night to have mouse nibbles in it come morning. This one  overlaps personal and stash safety. First, who wants to smoke what a mouse has been eating from? And, also, who wants to wake up in the middle of the night to a bear is sniffing around the campfire?

You put your cannabis stash away after you roll one and before you smoke, because you don’t want your dog getting into it. So if you don’t want animals getting into it, stash it accordingly in the car, bear box, or hung up with the rest of your food. Plus, you can keep its odor masked by using proper smell-proof gear.

On the other side, park rangers taking your stash is a surefire way to harsh a mellow. Worse, it’ll likely end the trip, and could lead to jail time. So how do you prevent that?

It’s actually quite easily preventable by knowing the legality of cannabis in the jurisdictions you’re travelling.

Cannabis and Camping in Canada

Canada’s camping and Cannabis Laws are, more or less, a beacon of hope for American citizens. These are relaxed – and the very fact that nothing has gone terribly wrong as a result proves that they don’t need to be as strict as other legal jurisdictions (more on that later).

Under Canadian law, your campsite becomes a temporary home. As a result, you are welcome to consume as much cannabis as you want in it. Does this mean you’re allowed to smoke when your neighbor has small children in their site? Yes – technically. But, be careful. If you offer to head away from your neighbor’s site in order to partake, you might be doing them a favor, but not yourself.

Essentially, it is a misnomer that it is legal to consume cannabis in all outdoor Canadian camping spaces, and in all provinces. The rules exclude common areas and playgrounds. Playgrounds are excluded for obvious reasons. Consumption is excluded from these areas at every location in Canada. There is an important catch, however – the definition of common areas can be broader than you think. In some provinces it includes all campground roads or trails.

In the eye of some Canadian provinces, common areas in campgrounds include kitchen and cooking shelters, washrooms, trails, and roads. Essentially, that leaves most of the campground itself as a non-smoking (non-cannabis) space. 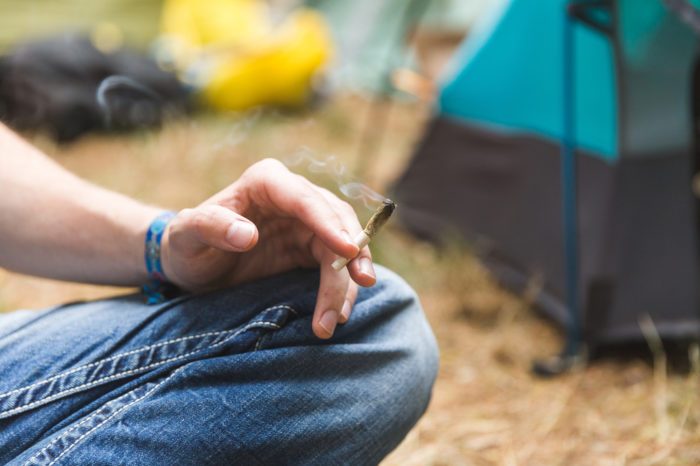 Some Provinces Differ in Cannabis Law

Thankfully, not all provinces are this strict. In some provinces — B.C., Alberta, Ontario and Quebec, for example, campers can smoke cannabis on hiking trails, as long as those trails aren’t within the campgrounds themselves. Note that roadways are still not open for consumption.

So what should the cannabis consuming camper do when a friend asks if they want to spark one up?

A Note on Smoking In Your RV

Smoking in an RV can be a great experience. It conjures the image of the smoke-filled love bus of days gone by. Further, this is also legal in Canada, permitting that the vehicle has a kitchen and sleeping area, and the driver is sober if you’re moving. However, take caution – you might be driving this vehicle past park checkpoints, and later on, the scent of cannabis leaking out the window may wrongly suggest you just partook. Take care to open windows, exhale outside, or vape.

Lastly, don’t forget to ditch every cannabis product before traveling over an international border. Even a roach in an ash tray could land you in serious trouble. This includes bringing cannabis from a legal state in the U.S. to a legal province in Canada. The law views you as an international drug smuggler if you are crossing borders with your weed. 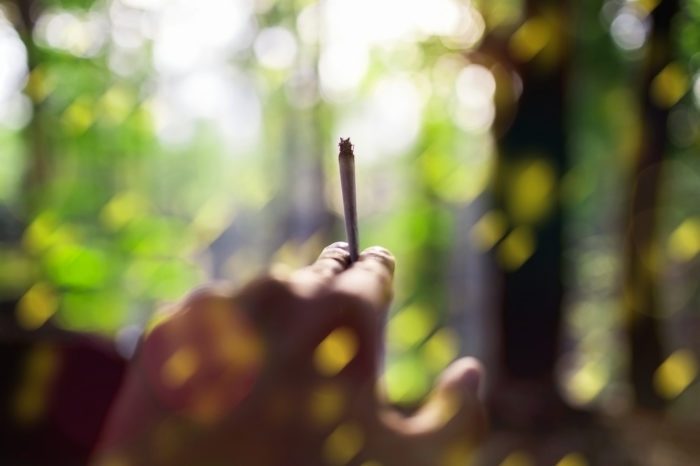 Cannabis and Camping in the U.S.

If you’re going camping in the U.S., unfortunately, it’s generally another story entirely from Canada. First of all, the best advice is to check the cannabis laws of any state you’re camping in before you light up. Moreover, National Parks are run by the federal government – and you’re technically camping on federal land – even in a cannabis legal state. Cannabis remains federally illegal in the United States.

You’d think that a legal state should obviously mean legal consumption in a state park. But, unfortunately, you’d be dead wrong. First of all, most legal states in the U.S. have strict requirements on where it is legal to consume. California, for example, doesn’t allow consumption in public. Washington doesn’t even allow consumption in view of the public. This means cannabis is illegal most state parks, due to the parks being public places.

This also means you cannot legally consume inside your tent or RV while camping in most legal states. Smoking during backwoods camping in state parks is also illegal, even if no one sees you.

Ultimately, the best rule of thumb for combining cannabis and camping in the U.S. is this: If you’re off of someone’s private property, it’s almost certainly illegal. That being said – there are plenty of private property camping sites across legal states that not only allow cannabis consumption, but encourage it.

Why Not Try Cannabis and Camping?

Overall, don’t let safety worries discourage you. With a bit of planning, cannabis and camping can be a truly wonderful experience. Responsible consumption can help the consumer relax, disconnect from society, and reconnect with the natural world. What’s not to like?