Grow Cannabis: Five Reasons Dirt is Good For You

There’s a reason why you feel happy after an afternoon in the garden. Dirt is good for you!

Horticultural therapy uses plants and gardening to improve mental and physical health. While science shows that there are many benefits, it can’t always explain why. However, the evidence overwhelmingly suggests that dirt is good for you – it helps with pain reduction, attention, stress, agitation, and more.

While many believe the benefits to be clear, the truth is that most of us don’t get very much contact with the land. There’s little doubt that in our far-distant past, we had a much more symbiotic relationship with soil. In fact, scientists believe that we evolved alongside dirt, that the microbes found in soil made their way to our gut where they establish what some term the “third brain.” [1]Beri, Kavita. 2018. “Perspective: Stabilizing the Microbiome Skin-Gut-Brain Axis with Natural Plant Botanical Ingredients in Cosmetics.” Cosmetics 5, no. 2: 37. While the scientific community doesn’t fully understand these complex interactions, the potential for a revolution in our understanding seems promising.

Why Dirt is Good For You: Five Gifts of Cultivation

From the dispensary to the supermarket, many of us meet our medicinal and dietary needs while avoiding dirty fingernails. But the truth is that dirt is good for you, and here are five reasons why.

Soil and the Human Gut Link

We have been hunter-gatherers for the majority of our species’ time (so far) on earth. That means humans had much more contact with the soil. In fact, scientists go as far as to postulate that soil was a major inoculant and provider of much of our gut bacteria. A study published in Microorganisms (2019), [2]Blum, W., Zechmeister-Boltenstern, S., & Keiblinger, K. M. (2019). Does Soil Contribute to the Human Gut Microbiome?. Microorganisms, 7(9), 287. https://doi.org/10.3390/microorganisms7090287 looked into how contact with soil is linked to gut biome biodiversity. The researchers noted that in recent decades, our contact with the soil has largely reduced, and suggest that this may contribute to adverse health effects.

Researchers also noted that “from early childhood, we are in contact with soil; we taste it, we inhale it, and we drink water which has passed through soil. Moreover, we ingest plants grown on soils together with soil microbiota.”

RELATED  Experience the Peace and Tranquility of the Cannabis Bonsai

There’s a complex and essential link between our health and the soil. While many of us rely on the sterilized food products from supermarket shelves, if the science suggests anything, it’s that by growing and consuming our own food, we may better meet the needs of those little-understood parts of ourselves. 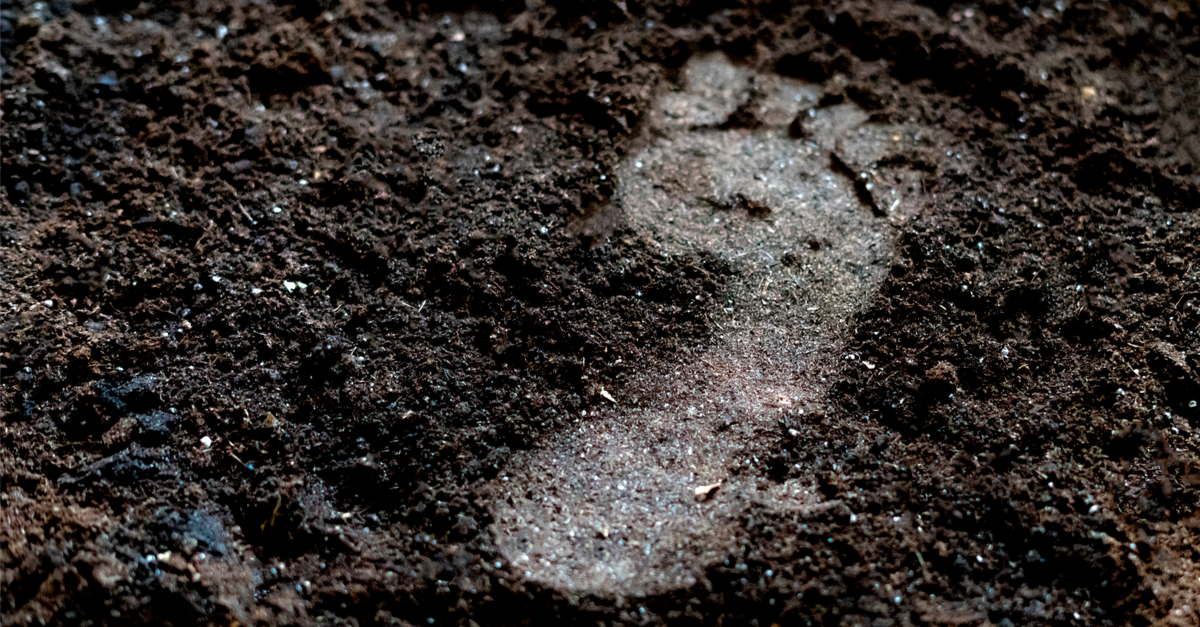 It may seem unlikely, but grounding yourself in the dirt may also have many health benefits.

The theory goes that as we walk around during the day, our cells build up a positive charge. With leather, or rubber soled shoes, the charge never has the chance to dissipate. By removing our shoes and placing our feet in the dirt, we discharge it into the ground. It may sound far-reaching, but science offers some degree of explanation for the phenomena.

A study published in the Journal of Alternative and Complementary Medicine (2013),[3]Chevalier, G., Sinatra, S. T., Oschman, J. L., & Delany, R. M. (2013). Earthing (grounding) the human body reduces blood viscosity-a major factor in cardiovascular disease. Journal of alternative … Continue reading investigated the effects of grounding on the human body. Researchers claimed that grounding has, “intriguing effects on human physiology and health.” After establishing that grounding increases the surface charge on red blood cells, they claimed it “appears to be one of the simplest and yet most profound interventions for helping reduce cardiovascular risk and cardiovascular events.”

Many proponents of the phenomenon like to stand in the dirt shoeless. And what better way to find balance than by tending to a cannabis garden barefoot?

Growing Your Own Medicine

Patients learn many skills and gain much from growing their own medicine. Firstly, patients know exactly what they’re putting in their bodies and avoid potentially harmful compounds. In the case of cannabis, it’s the ultimate quality control and money-saving hack. It also helps patients establish a deeper relationship with the plant. Indeed, for many, it even turns out to be a gateway hobby that lands them deeper into the plant kingdom, investigating all forms of natural medicinal plants.

RELATED  Growing Cannabis In Small Spaces Is Easy With These Tricks

The Anti-depressant Effects of Dirt

Soil contains one of nature’s more discreet antidepressants, a microbe named mycobacterium vaccae. This microbe increases cytokine levels, which in turn enhance the production of serotonin, the well-known neurotransmitter that modulates mood.

used the microbe to boost immune function in cancer patients. When it failed to work, researchers accidentally stumbled across a correlation between Mycobacterium vaccae and mood. Rather than strengthen the immune system, researchers found that it “significantly improved patient quality of life.” The positive effects of uplifting mood helped patients bear the emotional load somewhat better.

It’s one of the many reasons why horticultural therapy is a thing. It is exposure to a host of compounds, such as Mycobacterium vaccae, that help promote physical and mental wellbeing.

If the modern world needs anything, then it may be a more effective way to still the mind.

For those who simply can’t sit still for 20 minutes on a cushion, then gardening may be the answer. Nature runs at a much slower pace than the human mind, and when we put down the phone, feel our feet in the soil, and smell the roses, we connect and sync with her at a new level.

American poet Ralph Waldo Emerson once suggested to “adopt the pace of nature: her secret is patience.” And if there’s one thing gardening will teach you, it’s patience. The instant gratification available in supermarket aisles is far removed from the reality of the harmonious grind of tending to plants over a period of months.

Done correctly, gardening is a form of meditation. It’s one where we observe, notice, feel, smell, and eventually heal. A connection to the land runs deep in us, yet many of us in urban centers lack the means by which to frequently connect. For those with a desire to meet some of those primal needs, then gardening, and growing your own cannabis and vegetables may be the answer!

EDITORIAL STANDARDS
REPORT AN ISSUE
RELATED  Purple Weed is Legendary, But is it Real?

Tricks to Making the Most of Growing Cannabis Outdoors

The Importance of Greenhouse Sanitation for the Home Grow