How Long Do Edibles Last?

For most, the potency of edibles is unrivalled, but what measures can be taken to ensure consumption stays enjoyable?

How long do edibles last and how quickly do the effects come on? These are perfectly valid and sensible questions. Well, it turns out it’s different for everyone. There are a lot of variables that affect peak plasma levels and how efficiently the compounds absorb to make edibles last.

The edible is a very different beast to combusted forms of cannabis. Where some people feel mellow for an hour or two, others curl up in an anxious ball for six hours. Here we provide the lowdown on the journey of THC from the mouth to the receptor site.

The Bioavailability of Edibles

Bioavailability refers to the rate at which a substance absorbs into the body’s circulatory system. Foods that are not bioavailable are not absorbed optimally and pass on through.

Bioavailability is chiefly responsible for the differences in effects that people experience with edibles. Many things affect bioavailability including a person’s age, their metabolic rate, the condition of their GI tract, and even sleep cycles.

Cannabinoids are fat-soluble so ingesting these compounds with fat is mandatory in order to be effectively absorbed and processed by the body. If your edibles aren’t infused with a fat of some sort, then don’t expect your body to absorb much.

But supposing you’ve correctly decarboxylated your cannabis and have successfully infused it with a plentiful supply of saturated long-chain fatty acids. What does the body do with it when it recognizes it?

The Liver Vs The Lungs

Depending on whether you’ve eaten cannabis or smoked it, different organs process the plant compounds. In edibles, it’s the liver that does the heavy lifting, while for smoking, it’s the lungs.

When we smoke or vape, we feel the medicated effect due to the presence of Delta-9-THC. Once absorbed through the alveoli and into the blood, it then crosses the blood-brain barrier to stimulate the CB1 receptors. But this process can be a little inefficient. Since THC is fat-soluble, it doesn’t break down well in blood, which is mainly water after all.

With edibles, there is a further step involved as THC makes its way to the liver. Here it gets converted to 11-hydroxy-THC, a much more potent form of THC.

Bound to a glucuronide compound, 11-hydroxy-THC becomes much more water-soluble and hence has an easier time crossing the blood-brain barrier. This process takes time however, and is the reason why edibles often won’t kick in until thirty minutes to two hours after ingestion. 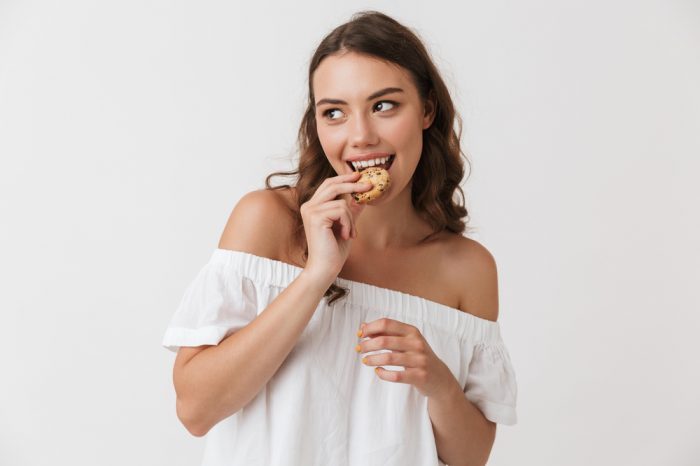 With the gut and liver in good working order, the next question is whether you should consume food along with your edible, or have it on an empty stomach?

A UK study, published in the European Journal of Clinical Pharmacology (2013), investigated how bioavailable cannabis compounds are in subjects who had eaten a meal prior and subjects who dosed in a fasted state.

Each subject received 10 mg of THC and 10 mg of CBD. On the first round, subjects fasted for ten hours before and four hours after administration. While three days later, subjects had the same doses again but also a high-fat meal thirty minutes prior to dosing.

Researchers found that both THC and CBD absorbs more readily in the fasted state. After one and a half hours, peak plasma concentrations were put on record. Among the subjects who consumed the high-fat meal prior to dosing, peak plasma levels did not occur until four hours after dosing. This makes perfect sense, as with more food in the digestive tract, the cannabis compounds took longer to be absorbed.

Interestingly though, peak plasma levels were higher in the group who ate a meal thirty minutes prior to dosing. In other words, those who ate beforehand actually absorbed more cannabinoids.

Researchers noted that bioavailability was 2.8 times higher for THC and 4.1 times higher for CBD. Food in the stomach merely delayed the time to peak concentration, but actually increased the levels of cannabinoids absorbed.

What Foods Combine Best With Edibles?

If you’re sitting down to a full-on meal or merely snacking, certain foods can enhance the absorption of the active compounds in your edible and the duration of the medicated effect.

RELATED  You Should Think Twice Before Dabbing Terpenes

The mango myth is mostly true, and it’s all down to the presence of a terpene called myrcene. This terpene helps THC cross the blood-brain barrier more efficiently. Consuming a mango before your edible will also help prime your receptors. It is not likely to increase the level of intoxication, however. You would have to eat about twelve for that effect.

The healthy omega 3 fats that are present in many nuts can help cannabinoids on their arduous trek across the blood-brain barrier by binding to them.

Broccoli combined with cannabis is a well-kept secret. But, by consuming both together, the high amounts of the terpene caryophyllene present in broccoli help modulate some natural synergies already present in the whole plant. The anti-inflammatory benefits offered by caryophyllene come to the fore, something that’s perfect for those treating pain. And if more people end up eating broccoli, what’s not to love about that combo?

Both black and green tea contain catechin. It’s an antioxidant that binds with the CB1 receptors and promotes feelings of peace and relaxation. Many find that a natural synergy plays out when consuming both together, where tea helps improve mood and lower stress levels. 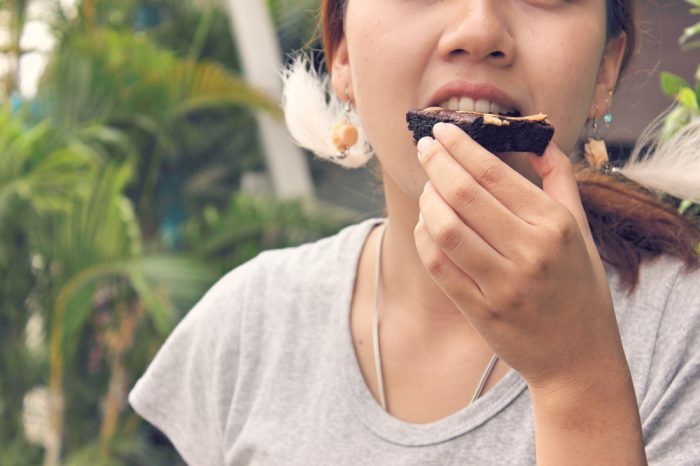 How Long do Edibles Last, and How to Ride it out if it Gets Too Intense?

Consuming cannabis edibles mean that the effects will generally last longer than smoked or vaped cannabis. Effects last for between four to eight hours for the majority of people. Though some can experience the effects for longer and much more intensely.

Whether you took another dose before you had felt the effects of the first, or just simply got your dose horribly wrong, knowing what to do when you’ve ingested too much is important.

If after consuming an edible you experience anxiety, terror, paranoia or simply complete confusion, then there are a few things you can do.

RELATED  Is High Potency Cannabis a Problem For Genetic Diversity?

Everyone has their medicinal ritual, but with a few tweaks, you can ensure optimal absorption. Try eating a small fatty meal thirty minutes prior, perhaps with mango for dessert. And remember, start low and go slow, while sipping on a cup of black tea to prime those receptors.

Can CBD Edibles Become Potent 11-Hydroxy THC In The Stomach?

How To Read The Label To Get The Right Edibles Dosage