Budder is a Concentrate That Keeps its Terpenes

Not to be confused with cannabis butter, budder is a high terpene concentrate.

This cannabis concentrate has a soft, non-viscous consistency. Its appearance takes the form of a greenish-brown to a buttery gold substance that delivers potency and a smooth flavor. Budder is a form of BHO concentrate and is one of many concentrates that lies within the wide spectrum of BHO extracts from shatter to oil.

Budder will typically have THC values in the range of seventy percent. But one of the main attractions of budder is the comparatively high preservation of terpenes. Budder maintains a significant percentage of the original terpene content when compared to other forms of concentrate. This is something which leads to enhanced flavor and additional medicinal benefit.

Where many concentrates boast insane amounts of THC and not much more, budder strikes the balance between high cannabinoid content and high terpene content. For those consuming cannabis to harness its medicinal properties, this is an important factor. A study published in the British Journal of Pharmacology and Chemotherapy (2011), discussed the entourage effect as it applies to cannabis. The potent synergies that play out between the cannabinoids and terpenes present in a particular cultivar are what make the medicine. And when it comes to concentrates, budder is one of those which preserves many of these essential compounds.

Cannabis concentrates range in consistency from a viscous oil to the glass-like shatter.

Shatter is a crystallized form of concentrate. The compounds within exist in a matrix that takes the form of a glass-like substance that’s transparent to light. Budder, on the other hand, has a creamy butter-like consistency that’s opaque.

When it comes to potency, there are two important considerations. THC levels in excess of eighty percent are common in shatter, but with that comes the absence of many useful terpenes. Shatter involves a second extraction process that removes fats, lipids and waxes. This results in increased concentrations of THC, but many of those tasty, therapeutic terpenes are forever lost. Budder commonly has THC levels of around seventy percent, but there is the preservation of a larger quantity of the terpenes.

RELATED  Cultivar vs Chemovar vs Strain: What's The Difference? 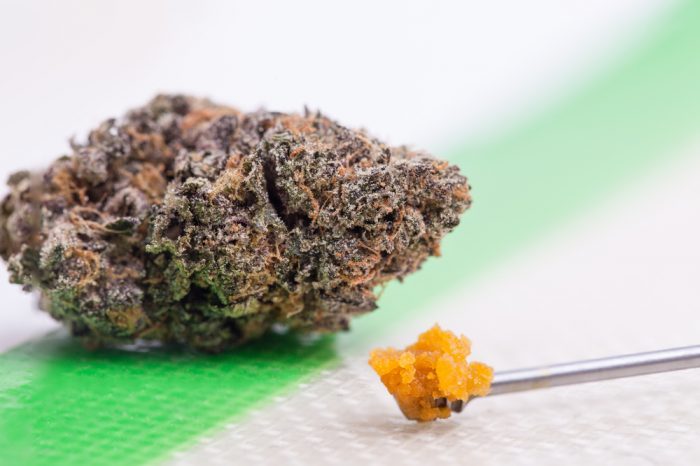 How to Make Budder

Budder comes from an extraction process using chemical solvents. The most common of which is butane, although  CO2, alcohol, or propane are also options. Butane is highly dangerous to work with. Only those with professional experience should do so.

To make budder, fresh cannabis flower is packed into a sealed extraction tube held above a pyrex dish before the chemical solvent is introduced. The solvent extracts the plant compounds and should be run through until the resulting liquid runs out clear. It will be yellow at first, but once the extraction of all plant compounds occurs, the resulting liquid should run clear.

With the resulting liquid in a pyrex dish, the solvent must evaporate off. This happens by placing the dish on top of a saucepan of simmering water to encourage evaporation of the butane. The liquid will gradually become thicker as the bubbles from the evaporating butane rise.

Once the bubbling stops, scrape the waxy substance into the middle of the bowl and place it over a saucepan of water heated to two hundred degrees Fahrenheit to refine it further and purge the remaining butane.

Once heated, whip the budder with a utensil to help purge any remaining butane. It is easier to work when hot as the budder is more viscous. Continue whipping to continue purging the butane. When the viscosity changes, the extract should take on a butter-like form, at which point, the process is complete.

Placing the extract into a vacuum oven will complete the purging of the butane. The exact temperature required and the amount of agitation required will differ depending on the cultivar used. However, experts most commonly purge it at ninety to one hundred and fifteen degrees Fahrenheit, at a pressure of twenty-nine Hg for twenty-four to seventy-two hours.

How to Store Budder

Storing budder properly is key to avoiding degradation over time. If stored incorrectly, the extract will darken and harden over time. For optimal shelf life, store it in an air-tight container away from direct exposure to light in a cool environment. As with many other forms of cannabis, moisture, oxygen, temperature, and light all speed up deterioration and degradation.

RELATED  How To Cultivate Living Soil For Quality Grows 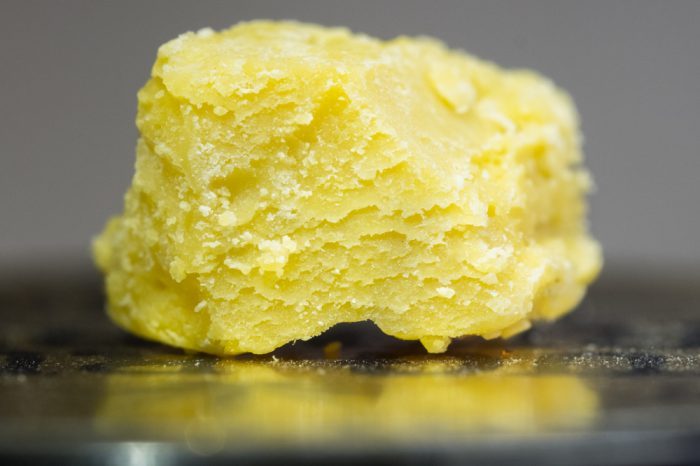 How to Consume Budder

As with many other forms of concentrate, dabbing is the most common method of consuming. As budder retains a significant percentage of the original plant terpenes, the optimal temperature for dabbing is between 350 to 400 degrees Fahrenheit. Dabbing at higher temperatures will only lead to the loss of vital terpenes, thus impacting both flavor and medicinal benefit.

Budder also works in edibles, although it must be decarboxylated first. To initiate decarboxylation, place the budder in a small dish and insert it into the oven at low heat. As the budder melts, it will begin to start bubbling. Once the bubbling peaks, turn off the heat and allow decarboxylation to continue. This will help prevent it from burning, and once it has cooled, you can add it to any edible recipe in its active form.

For those who don’t have a dab rig and don’t want the hassle of decarboxylating should know that you can also add budder to a joint. The process is called “twaxing,” and involves breaking apart or smearing the budder evenly on the inside of a joint. Due to its consistency, the consumer cannot apply budder to the outside of a joint like other concentrates.

Those new to budder should be aware that it is much more potent than raw cannabis flower. So start low, and take it slow.

How To Make Rosin Easily At Home

Potent Cannabis Extracts: What is Shatter?